Do not call conspiracy all that this people calls conspiracy, and do not fear what it fears, or be in dread. Isaiah 8:12 NRSV

Last night, I attempted a bit of humor here in posting my list of negative labels the Republicans have attempted to affix on Barack Obama. This morning, out comes a massively distributed Republican Party mailer: 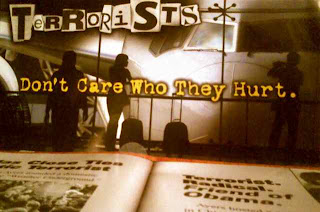 And this morning I'm not laughing.

The flier is a load. And we're being asked to swallow it. Once again, the McCain/Palin folks are going back to the Karl Rove playbook of nasty, baseless, negative campaigning. And let's be honest here. What is being implied? "Terrorists don't care who they hurt" the flier's cover says. And below it, fake newsprint headlines reading "Terrorist. Radical. Friend of Obama" and "Obama Close Ties...Terrorist." Get it?! Obama... TERRORIST! The large airplane reminds us of 9/11... Ah. Obama, Al Queida. No logical connection exists, but this is about effective illogic, vile lies being used to stir up hatred and fear.

Inside, just to drill the message home... 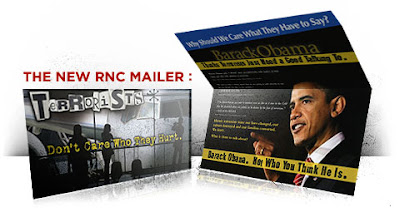 Forgive all the exclamation points which follow, as I'm a bit peeved this morning...

First starts the whining over Obama actually wanting to talk to terrorists instead of blowing their countries to hell! "Barack Obama Thinks Terrorists Need a Good Talking to." OH MY GAWD! He might actually favor diplomacy over attacking nations without provocation! So if diplomats are terrorists, as opposed to bomb-wielding nations, I'm left wondering what, in light of that definition, Al Queida would be called. Using this Republican pretzel logic, Perhaps Osama bin Laden deserves the Nobel Peace Prize!

"Barack Obama. Not Who You Think He Is." screams the banner along the bottom edge of this masterpiece of McCarthyite defecation. Well, I know who Barack Obama is. He's an American, he's a Christian, and he's a man who has spent his entire life in a disciplined effort to become a positive, unifying leader. His story (as evidenced in his two books) should (and I pray will be) an enduring part of our national legacy. Liars are fryers, baby.

I also know, beyond a shadow of a doubt, who John McCain, Sarah Palin, and the Republicans are. They are desperate people who are going to use the politics of fear and hate to attempt to win. This is frustrating, and scarey. Why? Because it worked in the past two elections. And despite Obama's current lead in the polls, I for one am not at all convinced that lead will hold up.

I have two messages for readers of this puny little BlueChristian blog.

One: This is short and sweet. Anyone who supports Barack Obama's candidacy for President needs to respond to this attack immediately by donating money to Obama's campaign. If you are really ticked at this, the Obama folks have a page just for us so we can make a specific, powerful statement. I'm going to do so today. I hope you will as well.

Two: Evangelical readers currently supporting John McCain and (perhaps even more enthusiastically) Sarah Palin. Can you step back for a moment and ask yourself why you would support a campaign capable of flinging this kind of hate-mongering poop? Can you ask yourself about your own theology -- and here I'm thinking about loving one's neighbor and loving one's God vs. embracing end times narratives from Hal Lindsay, Tim LaHaye, and such? The Republicans are counting on you as their base! That's the narrative here. They want you to be frightened of an American leader, a fellow Christian.

Let's get right down to it: they want you to believe Barack Obama is a closet Muslim terrorist. Well, do you? Honestly? You've seen him in the debates. Do you think he is anti-American? Do you think he is part of some massive conspiracy? Well, if you do, go ahead and vote for the Republicans. But if you sense they are lying about Barack, why would you trust them? We've been lied to for eight years. Here is a man with whom we may not agree on everything, but who has made repeated and thoughtful overtures to Evangelicals despite being slapped down in most of those efforts.

Who are we Evangelicals? That's what I'd like to know. I know who Barack is, and I know who the Republicans are... I've had years and years to watch them scream about abortion, then get into office and appoint pro-abortion justices. Go figure. I've seen them create a narrow litmus test set of issues (abortion and same-sex marriage) from which we are told to make every political decision. That day is over, people. Jesus cared about a LOT more than that. Read Matthew 25. Read the prophets, who along with immorality condemn Sodom and Gommorah for their mistreatment of the poor.

Evangelicals can no longer afford to believe the Republican version of reality. It ignores massive injustices outside that neat and small list of "family values." Affordable housing in my neighborhood is a "family value"... one ignored by the Republicans. And what about all the single parents -- most of them women -- who are more vulnerable than ever in this terrible economic recession we're experiencing? The Republicans say "pro-life," yet assault the poor repeatedly by stripping away programs offering rural and inner-city families hope.

No. No more. Evangelicals, are you willing to remain tools in the hands of hate mongers? We always seem to be on the wrong side of these things. From the days of slavery and lynchings, where entire huge denominations supported slavery (on what they called "biblical" grounds) to today, when those same huge denominations support the oppression and marginalization of women by men -- using the very same bible verses they used in the slave days -- we remain reactionary instead of biblically revolutionary. Where is that third way?

Barack Obama will not be the solution to all of this. Far from it. He's one man. And at times we may even find ourselves having to play the role of prophet against a man we voted for. That is the strange and salty role Christians are supposed to play. But hating is as unchristian as it gets. And the Republican Party's willingness to be hateful, to lie openly over and over again in hopes that their vicious assault on Barack Obama will give them the White House, should be a prime reason we stop being the "Republican base."

Base has another definition: "stresses the ignoble and may suggest cruelty, treachery, greed, or grossness." That, to me, sounds applicable to the Republican Party's treatment of Barack Obama. Can we, as the people of God, the Bride of Christ, continue to be part of that "base" (in both senses of the word) political crowd?

I of course have my own answer, but what matters is your answer.
Posted by Jon Trott at 9:36 AM

Amen! Thank you for verbalizing my frustration better than I could.

Thank you for this post. It is truly enlightened and I hope that it will be read by many. Thank you!

For the first time in my 22 year voting history, I've voted for a Democrat. I'm on permanent "Absentee" status and sent in my vote for Obama on Monday. You do a great job of pointing out what I've felt for some time is wrong with aligning myself with the Republican party. I've pointed some of my friends and family to your page. Maybe they'll figure it out too.

Throughout this campaign, I find it ironic that
McCain is becoming more senile as time passes.
His mind has abandoned him.

And the "funniest" thing of all, with the new al Qa'ida website saying that there should be another terrorist attack in order to help McCain get elected, because al Qa'ida and Ossama know that if Obama is elected, he is loved by so much of the world he will get an extended honeymoon, and it will be much harder for Ossama to portray us as The Great Satan- given all that, effectively, the terrorists have just endorsed McCain! Evidently, they want McCain in office, because that will make America an easier target, and they will be able to more easily continue their jihad against the U.S!

Which just shows you something rather eerie- the theology of McCain and the Religious Right is not all that different from the Islamic Terrorists. They believe that not only does violence work, but that we need a caricature of the enemy, and a more aggressive enemy, so that we have someone to fight with, and can continue the war.

Who would have thought the October Surprise was that Obama would be the better candidate to reduce terrorism?

I'm sure everything you write is true and the incredible truckload of manure discharged from the Left plus very personal venom poured on Gov Palin, in particular, is just my rabid, right wing, imagination.

I find your well written position to be that of a myopic partisan, just as much as mine would be if I were to attempt a similar recitation of grievances from the Right.